The Outernet was a ground-breaking concept in the integration of books and the internet when it was published in 2001.

The Outernet books are exciting, fast paced adventure stories but there was a whole new dimension which could be found at the Outernet’s very own website.

Unfortunately, the website is not working anymore, but we have plans to bring it back one day!

The 2Steves say… “The initial idea for Outernet came from Steve Barlow – he was sitting at his computer and suddenly had a thought – what would the galactic web be like and what would it be called? On Earth we have the internet, so out there… of course, the Outernet! We put this idea to our publisher, Barry Cunningham and he said we should not only write the books, but also create the Outernet on the web! Easy to say, but it took us a LONG time to decide how the books and website would work together as nobody had done anything like this before.”

Other people say…”It’s set a standard for other people to follow. There are few sites with this level of user involvement and nothing at all that is quite like this incredible journey into the Outernet.” 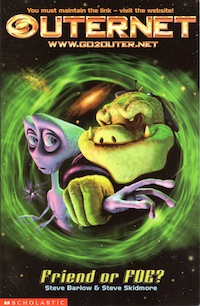 Strange things are happening among the ancient ruins of Stonehenge. Aliens fleeing the harsh rule of The Tyrant have arrived on Earth with The Server – a device that allows contact with the Outernet, the Galaxy-wide Web. Things on this small planet may never be the same again!
When The Server comes into the possession of Jack Armstrong and his friends Merle and Loaf, the result is chaos: Close Encounters of several different kinds, cats and dogs who aren’t what they seem, a trip to a theme park planet, and the arrival on Earth of a hapless alien ticket inspector, who goes on the rampage… Jack is entrusted with looking after The Server until the Friends can rescue it. For if it falls into the clutches of The Tyrant, the leader of the Forces of Evil, he will take control of the Outernet, discover the identity of The Weaver and become the undisputed ruler of the Galaxy. This would not be a good thing…

The 2Steves say… “Before we began writing the first Outernet book, we visited a USAF base near Cambridge, England, and researched Stonehenge, so that we could describe these places accurately.. Unfortunately, we couldn’t visit any planets or meet up with ALFs, so we had to had to use our imagination! We also spent some time deciding what we would call the goodies and baddies – we decided on FOEs (Forces of Evil) and Friends just fell into place because of the phrase, ‘Friend or Foe?’.”

Other people say… “Superbly written, it is original and funny.” 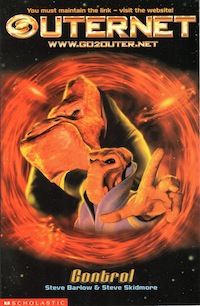 When Loaf’s greed causes the seemingly impregnable Chain protecting Earth from the FOEs to be broken, the Tyrant sends the Bug, his most ruthless enforcer, to get The Server back. As a result, Jack and his friends are stranded on Deadrock, a dangerous planet, crawling with FOEs, and Loaf runs into several representatives of the nastiest loan sharks in the Galaxy. Loaf owes them money and they’d like a word with him. Back on Earth, the Bug poses as as an agent of the U.S. government and gains control of Merle’s father, Colonel Stone, commander of a USAF base in England. Jack and Merle find allies- but the Deadrock Freedom Fighters face terrible odds, and all they have on their side are primitive weapons and a cranky Help application. Oh, and Loaf – but he may have been refomatted! As revolution rages on Deadrock, Jack and his Friends return to Earth in an attempt to rescue Colonel Stone and keep The Server from the FOEs.

The 2Steves say… “We liked the idea of inventing a planet where all communication had to be through electronic means. This gives the rulers total control over what people say, hence the name of the book. There are some serious themes in this book: censorship, standing up for what you believe in and personal responsibility. Oh yes, it’s very funny too!” 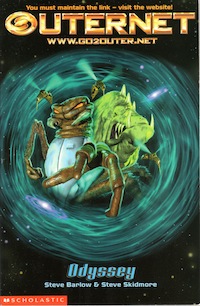 A mysterious message from Janus in N space has sent Jack, Merle, and Loaf (not forgetting their companions Googie and Bitz) in search of the planet Helios -but they’re not certain how to reach it, or what to do when they get there. That’s assuming they do get there.
Talking spiders, shape-shifting aliens and the constant worry about whether Loaf has really been reformatted by the FOEs are just a few of their headaches. And it doesn’t look as if pan-galactic hippy and self-styled space desperado Zodiac Hobo (and his ship, Trigger) are going to be much help. But the nightmare trip to Helios and the unexpected arrival of The Tyrant’s right hand -er-being, are as nothing compared with the final confrontation with Tiresias, the sightless one who sees all things…

The 2Steves say… “We knew that this book would involve a journey for the companions. Therefore we based this book on possibly the most famous ‘journey’ book in the world – The Odyssey, by Homer (not Simpson).
In it, Odysseus takes several years to get back home from the Trojan Wars, meeting many monsters and strange creatures on the way. Several of these found their way into this book…”

Other people say… “I love this book so much, I can’t put it in words!” 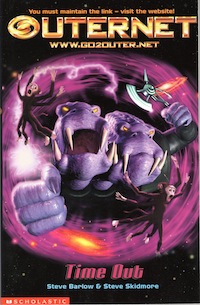 Jack, Merle, Loaf and their companions Googie and Bitz travel back in time to Vered II, homeworld of tree-dwelling computer genius Selenity Dreeb. However, Merle and Googie are plunged into a bewildering universe of alternate Earths and parallel realities.
And if Jack, Merle and Bitz are confused by their Friends’ disappearance, they are even more confused when they return, accompanied by Loaf’s alter-ego (as if Loaf didn’t have enough ego to begin with). Even Janus is being less than helpful. A confrontation in N-Space leads to the Great Clock of Vered II and a desperate race to change the future -but in the multiple realities of the Trousers of Time, nothing is ever what it seems…

The 2Steves say… “This book gave us our biggest plotting headache! We had to work out timelines and parallel realities and alternative settings – it took us ages. Finally we drew up a graphic chart to show how all the events could actually take place and work logically. Even our publishers had headaches trying to make sense of it all!” 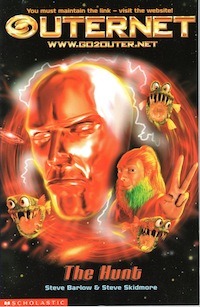 The Tyrant has retired the Bugs for their repeated failures and recruited Bounty Hunters, the ruthless, self-serving scum of the universe. Their task is to hunt down The Server along with Jack and his Friends. Mad Moxie, the Thing With No Name and Tingkat Bumbag (the most feared Hunter in the Galaxy) are bad enough, but when The Tyrant’s renegade ex-Communications Chief and Zodiac Hobo, space adventurer extraordinaire (not forgetting Zodiac’s ship, Trigger) lend a hand (or in Tracer’s case, six hands), things get seriously out of hand.
What follows is a roller-coaster ride around the Earth as Jack and his companions try to stay one step ahead of the Bounty Hunters and activate the planet’s ancient defences against alien invasion. From Stonehenge to the Pyramids and other places even more mystical and strange, the chase is on…

The 2Steves say… “We really enjoyed writing this book – after the problems with time travel, it was good to bring the action back to Earth and be able to research some of the most mysterious and strange places on this planet. This involved Steve B visiting Egypt and both of us reading lots of books and watching videos, before deciding upon which settings we would use.”

Other people say…”Where do these guys get their ideas from? Great books…! Really funny!” 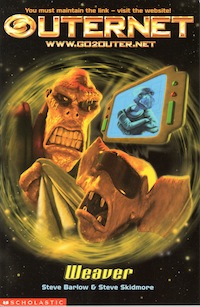 Jack and his companions have foiled The Tyrant, leader of the FOEs and Most Evil Being in the Galaxy, time after time. But this time, it’s different. This time, it’s personal. Because this time, The Tyrant has kidnapped Jack’s parents.
And now Merle, Loaf, Googie and Bitz have to help Jack take the fight to the Dread Lord himself, to the depths of the Dark Pyramid.The final struggle to save The Server, and with it the Outernet, the Pan-Galactic Web itself, is about to begin. The lines of battle are being drawn. What are the secrets that Janus would never tell Jack and his friends? Who is The Tyrant? Who is The Weaver? In the final confrontation between Friends and FOEs, all is revealed…

The 2Steves say… “When we began writing the Outernet series, we weren’t sure who the Weaver was going to be or the secret identity of The Tyrant. It took us some time to realise who The Weaver was going to be – but when we did, it just seemed the right choice. We think it’ll surprise a lot of people! When you’ve read all six Outernet books, re-read the earlier ones and see how many clues we’ve put in (and a few red herrings as well).”

Other people say… “Amazing climax to the saga, but is it really the end?”