We love Star Wars – in fact we are so old that we saw the very first one (number 4?!) when it came out in the cinema. It was great. Over the years we have followed the adventures of the gang, even through to the very latest ones (nice CGI, but not great stories!). So we couldn’t resist when Barry Cunningham, who discovered Harry Potter, wanted us to do a parody of the movies. We had to watch all the movies over and over, so we could get the book just right. Sometimes it’s a hard life being a writer!

The 2Steves say… “Feel the farce!” 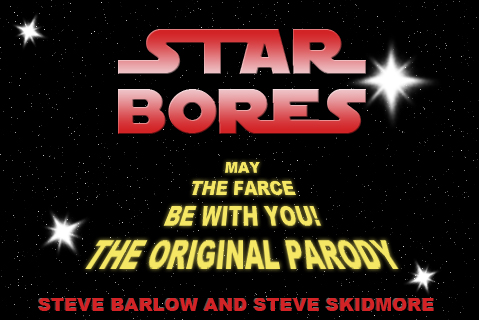 long ago in a

A story of unbelievable heroism, unspeakable villainy, where new but appallingly familiar characters including Princess Liar, Har Har Jinx, Panakin, Puke and Choccibikki the Cookie mess about in a hilarious struggle of good versus evil

Star Bores is a parody. It is not authorised, endorsed or licensed by Lucasfilm Ltd. or anyone else connected with the Empire.

The 2Steves Say…”We wrote the original parody in 1999. Then the next saga came out, so we wrote that part and combined them in a flip book.”

Other people say… “Hilarious! I couldn’t stop laughing at this book.”