We have been busy! Not only have we been writing a brand new iHero Quest (more details to follow soon) but we have been touring. We’ve travelled thousands of miles, visited dozens of schools and seen hundreds of students and staff!

Steve S visited a school in Mestre, Venice for a great morning with enthusiastic students.

We kicked off with another visit to North Wales where we visited Ysgol Cystennin, Ysgol Melyd, Bodnant Community School and Ysgol Cores Atti.

This was followed by a day in Roundhill in Leicestershire and then it was a week in East Anglia. We had fun in Kenninghall, Angel Road and Catton Grove in Norwich before heading down to Ipswich to see our friends in Sidegate and Gorseland Schools.

February saw us in Ebbw Fawr and the Cardiff Cathedral School before we hit the road West to Pembrokeshire, where we braved the storms and 100 mph winds.

We had a great time in Goodwick, Prendegast, St Telio’s and Haverfordwest VC. Our afternoon in Neyland School was interesting! The storms hit us big time – we began a show with 180 kids and ended with 18. It wasn’t because we were awful – the school was told to close and parents came in to take students home to avoid the winds! Well done to those who were left!

Then we were off to China before returning for three days in Yorkshire in Carlton in Snaith Primary, Filey School, Lady Lumley’s School, Pickering and Norton College – thanks Sheila for organising and putting us up!

We took a deep breath before another day in Ivybridge CC where we presented their Book and Beyond reading scheme prizes and then zoomed over to Gatwick to catch a plane to Bonn and a visit to The International School, where we were royally entertained. 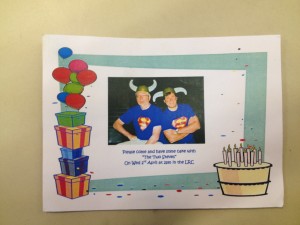 At Ivybridge, some lucky students won a break eating cake with us!

The term finished with four days at a lovely Welsh medium school in Abergele – Diolch yn fawr, to Hugh and his team at Ysgol Glan Morfa.

Phew – take deep breath and get ready for more travels next term!