The Mad Myths series was first written many years ago for Puffin books. They then went out of print, but were revived by the wonderful Ann Jungman at Barn Owl Books.

Sadly they are once again out of print BUT the good news is that they are available as Kindle editions!

The very first Mad Myth, Stone Me! was originally a play, written for Ginn publishers. People enjoyed it so much that we rewrote it as a story.

We then continued to write more stories as we loved the idea of bringing the monsters and heroes of Greek legend to the 21st century. We also loved the characters we had created. We might even write more adventures of Perce, Andy, Wellard and Eddie one day!
There are five Mad Myths books for you to enjoy.
####
#####
##### 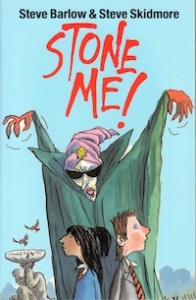 When Ms Dusa, the eccentric supply teacher turns up wearing black glasses and a turban, Perce and Andy become suspicious. When some of their fellow pupils get turned to stone, the two decide some decisive action is called for!

The 2Steves Say… “We love the Mad Myths series, so we were very happy when Barn Owl Books wanted to reprint the original books. Stone Me! was originally written as a playscript, but people loved it so much that we turned it into a story!” 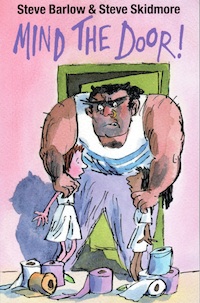 Mr O’Taur is a brilliant caretaker. He keeps the school spotless. He runs the gym club. He even wears a trendy nose-ring! Andy thinks Mr O’Taur is great. Perce isn’t so sure. He seems a bit of a bully to her. Her quest for the truth leads Perce, Andy, Well’ard and Eddie Johnson into a labyrinth of mysteries, dangers and dark deeds!

The 2Steves say… “We really enjoyed writing this book. Some of this story was based on Steve Barlow’s schooldays. You’ll have to guess which bits! (Clue: read chapter five).”

Other people say… “The Minotaur myth told as only the two Steves could tell it. Complete with appalling (but very funny) jokes.” 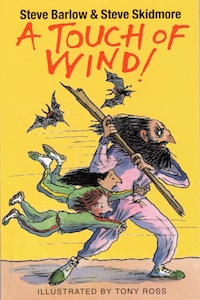 Look what the wind’s blown in! When Odysseus left the Siege of Troy for his home in Ithaca, he wasn’t planning a detour via Bogmouth-on-Sylt. He’s already put the wind up Major Eyeswater. Perce and Andy are trying to get him back where he belongs, but they’re making heavy weather of it. The Voyage of Odysseus – as it really happened?

The 2Steves say… “The incident with Eddie Johnson in chapter four is based on a true incident that happened when Steve Skidmore went to girl guide camp (yes, honestly!).”

Other people say… “…hilarious spoof on the Odysseus legend. the Two Steves make the reader laugh.” 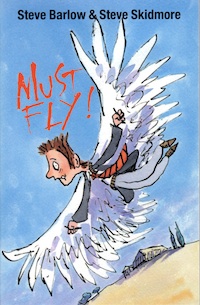 When fly guy Icarus takes a running jump from an ancient Greek clifftop, he lands in a leisure centre swimming pool. And where Andy gets to after he leaps off the high diving board is anybody’s guess… Can Perce, Eddie and Well’ard prevent Icarus’s fall from grace? Will Andy’s escape be a soaraway success. or is he for the high jump? A myth adventure with altitude!

The 2Steves say…”This is one of our favourite Mad Myths. The incident in chapter one is based on a true experience that Steve Skidmore had when he went to Girl Guide camp and was showing off bigtime!”

Other people say… “… another ‘must buy’… fast and furiously funny.” 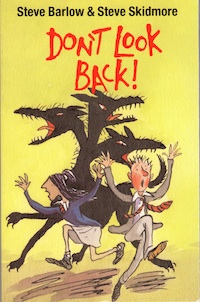 When Perce, Andy, Eddie and Well’ard go on a school trip to London, they don’t expect to find the most famous musician in Ancient Greece busking in a tube station. And their plans for the day don’t include joining him on a journey down into the darkest reaches of the underworld to rescue his wife. But the best laid plans don’t always work out. It’s going to be a hell of a day!

The 2Steves say… “This is a brand new mad myth! We really enjoyed writing another mythadventure for Perce, Andy, Well’ard and Eddie. It was like meeting up with old friends!”

Other people say…”Fast-paced… the dialogue brims with juvenile banter, bad puns and jokey references to music and film… the writer’s use of language is rich and evocative.”

Tags A TOUCH OF WIND Cool Stuff don't look back! Mind the Door! must fly Stone Me!