Vernon Bright is a scientific genius (and doesn’t he know it!), but he never knows when to stop! When Bright’s experiments go wrong, the result is hair-raising, school-wrecking anarchy – science has never been so hilarious!!

The 2Steves say… “We wanted to create fiction based on scientific principles (literally – science fiction) so we invented Vernon Bright – he’s one of our favourite characters!
We enjoyed putting him in crazy situations and then making them even worse!
In the course of the series Vernon has to deal with: being stuck to a moving train; a ten metre tall hamster; exploding warehouses and a machine that can destroy the world!

Bright and Watt were partly inspired by a famous fictional detective and his bumbling friend, a doctor. Guess who we had in mind. It’s elementary!”

Other People Say….”(their writing is)… wild, nutty and particularly boy-friendly.” 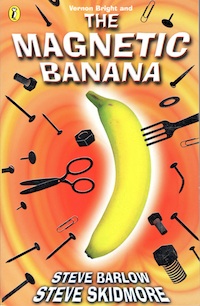 John Watt thinks science is boring until he meets Vernon Bright. Then he discovers that science can be interesting, weird, and just plain scary!
Why, Bright wants to know, is it that only a few metals are magnetic? Why not for example, bananas? Or worms? Or Horace the Guinea Pig? But when one of his experiments goes wrong, turning Bright himself into a magnet, the results are catastrophic. Bright can’t go near anything made of metal without it attacking him. And bashing him over the head with a cricket bat just isn’t going to work!

The 2Steves say… “This is one of those titles that went through a lot of changes. Originally, Vernon Bright was going to be called Terry Sparkes, but then Terry Deary started publishing the Sparks Files, so we had to change his name. Earlier titles for the book included Magnetic Attraction and Vernon Bright and the Hairy Worm Experiment.

Other people say… “This book is fantastic, exciting and funny -a hilarious read.” 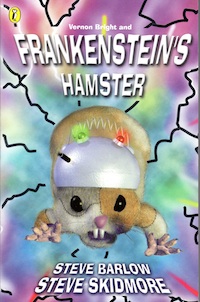 John Watt is supposed to be looking after Mister Nibbles, the biology lab hamster. When he escapes and is mangled by John’s cat, he thinks he’s in big trouble. But when Bright finds Doctor Frankenstein’s notebook and puts Mister Nibbles back together again (with a few bits of rat, gerbil, and guinea pig mixed in) and brings him back to life, John realizes that his troubles are just beginning. And that’s before the reanimated Mister Nibbles starts to grow…

The 2Steves say… “When Steve Barlow went to infant school, they all had to draw a picture of their pets and write about them, and the teacher put their work up on the wall. One of the boys in the class, called Raymond, had drawn a very strange creature and underneath it he’d written what looked like, ‘I have a monster.’
Steve B said, ‘Raymond, you liar, you haven’t got a monster.’
He said, ‘It doesn’t say monster, it says hamster.’
Thirty-odd years later, Steve B remembered this and thought, Wouldn’t it be fun to write a story about Frankenstein’s Hamster?!

Other people say… “As ever, Barlow and Skidmore are on sparkling form – a hugely entertaining read.” 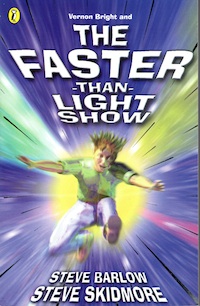 When Bright blows up the school orchestra, the Head bans him from doing the lighting for the school play, Julius Caesar. He is only allowed to video it. After all, even Bright can’t get into too much trouble with a video camera -can he?
Of course he can, especially when John’s hamfisted rewiring turns the video gear into a device that can see several days into the future.
Dodgy Dave is quick to see the financial possibilities. But when the Faster Than Light Show starts to predict disaster – even death – the future doesn’t look so rosy after all.

The 2Steves say… “Steve Barlow was once in a production of Julius Caesar, playing Lucilius. Who? Exactly. He only had about ten lines, and six of those were cut. We also wrote about a school production ( Romeo and Juliet this time) in our book Dream On!”

Other people say… “…the authors have an obvious affection for the society of school, but their books are not only for laughs. Written with particular appeal to boys, they are grounded in extensive research.” 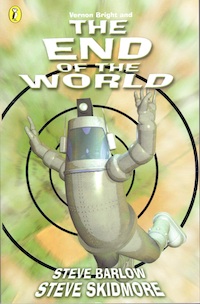 When Mister Hardman (the PE teacher who was thrown out of the Royal Marines for excessive cruelty) challenges Bright to a weight lifting contest, brawn against brain, he has no idea what he’s started.
Because if Bright can’t make himself stronger, he’ll have to make the weights lighter and to do that, he has to invent a machine that will defy the force of gravity.
And when the machine goes out of control, well, it’s not the end of the world. It’s worse than that!..

The 2Steves say… “In The First Men In The Moon by HG Wells (Pub.1901), an inventor called Cavor invents a substance (which he modestly calls ‘Cavorite’). With his partner Bedford, he builds a capsule out of Cavorite and goes to the moon. The reason Wells was able to get away with this hare-brained idea is that back then, nobody knew exactly what gravity was. The nice thing is, they still don’t, which is why we were able to get away with this story”

Other people say…”Some great one-liners! This book is an entertaining romp with an educational edge and bags of boy-appeal.”