Our Books, Tales of the Dark Forest

The Dark Forest is a mythical world of trees and scattered cities. Hundreds of strange beings inhabit this world: humans, highwaywolves, dragons, boggarts, gobblings, trolls, wizzards and many, many more. It’s a whole new world of comic adventure…

The 2Steves say… “The Dark Forest was inspired by the tales of King Arthur and the Knights of the Round Table, who ride out from Camelot to seek adventure in the Forest Sauvage.
Most of the beings that inhabit the Forest are creatures of British and European folklore and fairy-tale, but others have escaped from films – or our disordered imagination!”

Other People say… “These two guys just keep hitting the right note every time. These books are so easy to read and the stories so well thought out that you just can’t put them down! Thanks Guys I love Ya!!” 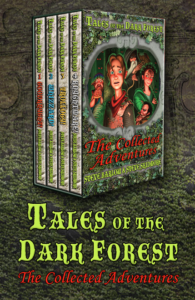 You can get all four books as a box set for a silly low price! Or buy them as individual titles. 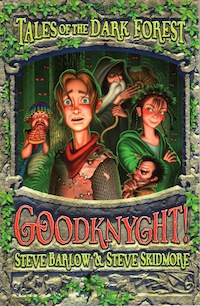 The 2Steves say… “As this book was the first of the series, we enjoyed inventing interesting and funny characters that we knew would be around for sometime, particularly the Harp and Humfrey. Our editor, Stella Paskins, came up with several excellent suggestions to help us get the feel of the world and make the story pacey and we think it works!”

Other people say… “an excellent adventure… This is so well written. “ 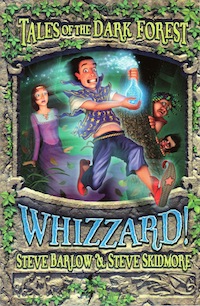 The 2Steves say… “This is one of those books where the title came first. Then we had to ask – what is a Whizzard? What does it do?
Captain Gorge’s seafaring terms are all authentic, but meaningless in the way he uses them, and Sulkies are the Dark Forest version of Selkies, the mer-people of Orkney and Shetland.” 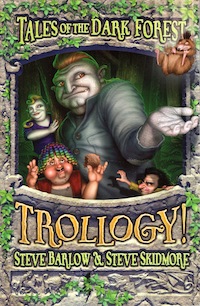 Bertram loves to feel the grass beneath his feet the sun on his face, the wind in his hair, which would be fine for a human. But Bertram is a troll. And sunlight turns normal trolls to stone.
Disowned by his own kind, and accompanied only by Cliff the semi-suicidal lemming, Bertram sets off into the Dark Forest. He finds refuge and friendship in the city of Dun Indewood until a massive Troll army appears before the city hell-bent on revenge.
Bertram must choose his side, and dispel the shadow of the Troll Lord, if he is to save the people of Dun Indewood and free his own…

The 2Steves say… “All the troll names are the real names of rocks and minerals we thought that would be appropriate for a people who lived underground. Lemmings don’t really hurl themselves off cliffs. Usually they get pushed. The Tröllenbach Falls are based on the Trömmelbach Falls, a spectacular underground waterfall near Lauterbrunnen in Switzerland.”

Other people say… “This is an absolutely stonking book. I couldn’t stop laughing and when I did I just started again.” 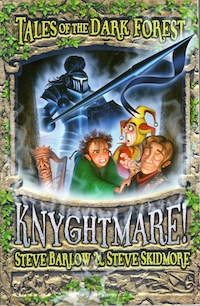 All is not well in the city of Beau Revere. Will is trapped in the dream-world of the Knyghtmare. Rose can’t wake him, and despite Tym’s help, the Dreamwalker is powerless to intervene.
Can Will survive the dream-tests set by his grim adversary?
Can Rose preserve him from the dark wiles of the Princess Shayde and the sinister dream-reader, The Vizier Shaman Al’Seer?
Can the Harp keep her awake without getting smashed to matchwood? And can Humfrey the Boggart discover the power behind the Knyghtmare before Will is lost forever in an unreal world of menacing shadows and evil dreams..?

The 2Steves say… “What we call a Nightmare is thought to come from ‘Mara’, an old English term for a demon who brought bad dreams. The word now only survives in nightmare and in mare’s nest, meaning a complicated and baffling illusion.”

Tags Tales of the Dark Forest