Our Books, Out Now, Plays 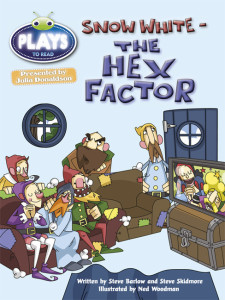 Grouchy, Jumpy, Soppy, Boastful, Chatty and Dozy are watching Snow White on the Hex Factor. They remember the days when she used to sing to them – before fame called!

Then someone arrives at their cottage… Who can it be?

The 2 Steves Say… “We enjoyed writing this play and loved coming up with some terrible jokes!”

Other People Say… “These look fantastic.” 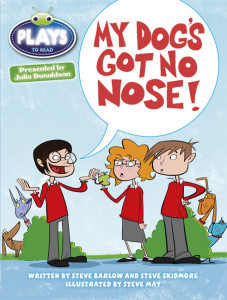 My Dog’s Got No Nose!

So how can he smell then? That sounds like the beginning of a joke – and it is! Ben is trying to tell his mates a great gag, but they get the wrong end of the stick… Or do they?

The 2 Steves Say… “We loved taking the idea of someone trying to tell a joke and the other people not getting it! (not that it has ever happened to us of course!).

Other People Say… “Written to get kids reading.” 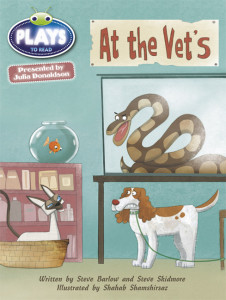 What sort of thoughts does an animal think when they are waiting for their appointment at the vet’s? Read this play and find out! You’ll be surprised…

The 2 Steves Say… “We once wrote a play about animals called ‘Ten Green Bottles’ – this one is a lot funnier though!

Other People Say… “A great series.” 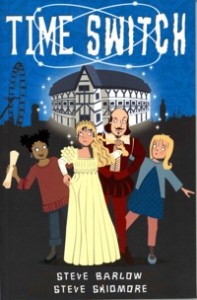 Time Switch – A Play for 6 people

When Bev and friends go to audition at the Globe Theatre in London, they don’t expect to be spirited back to the year 1600. Plague is sweeping London and Shakespeare’s theatre company need young actors. But is Tim a good choice to play Juliet? And can Bev and Hayley prevent murder most foul as a jealous rival plots his revenge?

Other people say… “A humorous play set in Tudor times with parts for six people.” 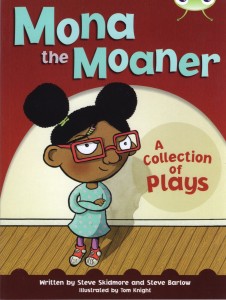 Mona is the world’s greatest MOANER! A day at the seaside is BORING. Losing your Gamestation is TRAGIC and BORING! Mona is going to moan, moan, moan about everything… or is she?

The 2 Steves say… “These are based on the sort of person who moans about everything. Who are they based on? We’re not going to say, or we could get into BIG trouble!” 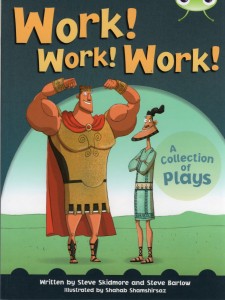 Hercules has been a very naughty boy. To make up for it, he’s given a number of jobs to do by the Greek Gods. But there aren’t the easy go-down-to-the-shops or wash-the-dishes type of jobs. These are worse – a lot worse!

Getting them done is going to mean work, work, work!

The 2 Steves say… “Monsters! Heroes! Gods and Goddesses! The myths of Ancient Greece are full of these and more beside. We’ve always loved reading and writing about them. One of our favourite myths is the Labours of Hercules (or Heracles in Greek).

Heracles was half man, half god and total hero! But he could also be a bit of a naughty boy. He got into trouble, BIGTIME, and as a punishment he had to perform twelve tasks (or labours). We’ve taken three of our favourite labours and turned them into playscripts. We hope you like them…

Other people say… “This is a FUNNY book!”